Faust and flying man or How Faust invented the parachute

On the terrace of Memorial Center “Faust Vrančić” in Prvić Luka, as the part of the outer exhibition, there is the model of Homo Volans/Flying Man, Faust’s parachutist in natural size. It is most certainly Faust’s most famous and most recognizable invention, which is, along with Faust’s initials, a part of the logo of our Center.

The history of the parachute, that is, the idea of flying, levitation or safe landing is really old. The oldest recordings are in ancient Vedas, religious texts originating in ancient India, where the use of special suits which are then inflated to ease the fall is mentioned. There are also legends from ancient China:

one about a ruler, burning roof and two straw hats, and the other one about the thief, persecutors and two open umbrellas – in both of these stories the main characters were forced to jump and then successfully landed, using like Jackie Chan, the closest thing they has, but the principle behind both stories is essentially the same – providing air resistance.

But in the search of the more accurate proof than a legends we have to move on the timeline up to the Renaissance Europe. The oldest known sketch of the parachute was made in 15th century, and it is supposed that its author was Italian artist, inventor and architect Francesco di Giorgio Martini. It is kept in British Library in London. Later, also in 15th century, there is a sketch of famous Leonardo da Vinci from his collection of drawings Atlantic codex (The Codex Atlanticus). Mentioned parachutes had similar shape – cone in the first and pyramid in the second example, and they also had in common the fact that the both parachutists are holding onto poles from the inside of the parachute. The other thing they have in common is that the both renaissance parachutes work only as a good idea on a paper – that is, in practice, they are completely useless. That finally leads us to our Faust – the father of the first functional parachute. Not only that if functions, but Faust’s parachute is also the first printed design of the parachute in technical literature. It can be found in Faust’s collection of inventions Machinae Novae (New Machines) under the number XXXVIII and the title Homo Volans – Flying Man, and Faust gives it an explanation in the comments:

“In foursquare sailcloth, tensed with four equal poles and on four corners securely attached with the ropes, one can safely descend from the tower or another high place. Even if there is no wind at that time, the force of the falling man would produce wind, which would keep the sailcloth, making the man’s descend slow and safe rather than unsafe. However, the man’s measure must be exactly aligned with the size of the sailcloth.”

Some authors, such as Škoberne and Muljević, have referenced on the work of dr. John Wilkins Mathematical Magic from 1648 while writing about Faust’s parachute. In that work dr. Wilkins allegedly describes Faust’s experiments of the jump from the tower on St. Mark’s Square (Piazza San Marco) in Venice. There are also legends about his jumps from fortress in Veszprém where Faust used to work for two years as a commander. But when croatian scientist Marijana Borić has dedicated herself to research of Faust, she read whole Wilkins’s book and found out that there is no mention of Faust by his name, but the author mentions Elmerus, English monk who jumped with the device in the shape of the wings,  as well as few other demonstrations of the jumps which mostly resulted with broken limbs – one of which really happened in Venice. Legends about jumps and broken legs of the helpers were also connected to Leonardo, although in his case there are no written proof of that too. Nevertheless, just a legend is completely enough for tourist workers in his hometown who promote hill Monte Ceceri as a place from where Leonardo has done his experiments. That kind of statements also exist at Prvić Island, thought up by self-proclaimed tourist guides, but also across web with claims that from the steeple in Prvić Luka Faust practiced jumping (the steeple was built in 1885 – more than 250 years after his death).

With all this stated, there are sadly still two unknowns: did Faust know about Leonardo’s sketch of parachute, how and with whose help did he prove his “one can safely descend from the tower”. Giovanni Ambrogio Mazenta, the superior of the Barnabites Order, whose member Faust was, and also one of Faust’s friends has made the collection of technical designs of Leonardo da Vinci. It is still not known if our Faust ever held handwritings of his famous predecessor in his own hands, since it is not mentioned anywhere. Regarding the testing of the jump with parachute maybe in the future we find something more concretely if any scientist digs up the document from some of the archives, which would represent that missing part of the puzzle. Anyhow, not that long ago, in 2009, someone did test the Flying Man. Production company Wild Dream Films filmed serial Ancient Discoveries for History Channel. In the episode Airborne Assault, dedicated to air warfare, you can see how professional parachutists have jumped from the bottom of hot air balloon, from height of 6000 feet (1.828,8 m) at the speed of 6,7 m/s with the help of Faust’s parachute replica. They were pleasantly surprised with the performances of parachute dating about 400 years in the past. You can watch this video here. 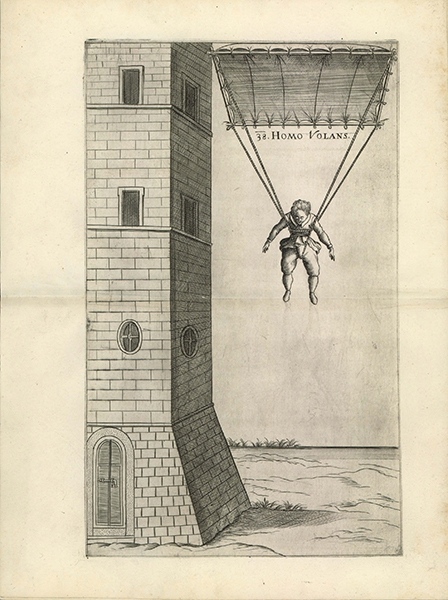 Until the next parachute testing one century and a half has passed, and that time was marked by French. Louis-Sébastien Lenormand did his public jump with the parachute from observatory in Montpellier in 1783. He jumped from the height of 20 m in front of the members of the Academy and numerous audience. Allegedly he previously experimented by jumping from the tree and by modifying the old Chinese idea with two umbrellas. Lenormand is also the father of the word parachute, made from Greek prefix “para”, meaning “against” and French word “chute”, meaning “fall”. Not long after that, in 1790s, French balloonist Jean-Pierre Blanchard introduced using of the silk as a material in parachute, without firm construction and for his first demonstrations he uses dog as a jumper. Andre-Jacques Garnerin in 1797.  does a jump with a gadget similar to a closed umbrella with basket, attached to hot air balloon from where it detaches on certain height – and he succeeds. The beginning of the 20th century brings us the first parachute jumps from the airplane. Grant Morton jumps from Wright model B airplane in 1911 in California, Venice Beach. First military parachute has been patented in 1914, and his author Slovak Štefan Banič has sold it to the US army. The same year first parachute free fall happened with the automatic opening of the parachute and it was done by a woman – Georgia Broadwick. In First and Second World War parachutes have gain on importance and significance and therefore, as the time passed by, different types of parachutes were developed.

Nowadays, a skydiving is a very popular sport in the whole world, but what is important for our story is the  fact which can be confirmed by any skydiver:  Faust’s Homo Volans is undeniable forerunner of modern parachute since it truly has all its elements.

Man’s eternal dream about freedom has its metaphor in flying. The most famous story from the Greek mythology is on that subject – the one about Daedalus and Icarus. Since our humanist Faust was truly inspired by the classical period, we are not surprised that he put illustrations of allegorically represented myth about the father and son who dared to fly into comments of his Machinae novae. Daedalus is also present there as a symbol of ancient inventor. The advice which Daedalus gave to his son Icarus before he spread his wings was: “don’t fly too high so that the sunlight doesn’t melt the wax from the wings, but also not to low, so that the moisture from the sea waves doesn’t soak up the feathers.” The advice about the importance of moderation, finding one’s place in the world, knowing the golden middle, the balance – it is very similar to the Faust’s: “however, the man’s measure must be exactly aligned with the size of the sailcloth.” More than twenty years of political activity at the court of one of the most controversy ruler of the Europe, Rudolf II, has definitely taught him well. But regardless of falls and failures, the men will, as our Faust and many before and after him have, always dream about flying. To some the flying represents running away from the frequency of everyday life, while it pushes the others in new challenges, to pierce the comfort zone, grow and progress – it moves boundaries of the overall human experience.

and stay in progress with our The project is co-financed from
EU pre-accession funds